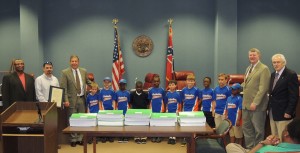 The Board of Supervisors recognized and commended the Hattiesburg Americans 8 year old baseball team for reaching the championship game of the 2012 Dixie Youth Regional World Series in Searcy, Arkansas. The team won 6 of 9 games played over a three day span.

Prior to reaching the World Series, the Americans amassed an undefeated record of 21-0 and won the State Tournament held in Magee.

The next Board of Supervisors meeting will be held on Monday September 19th ,  at  10:00 am.